Landscape of Quantum Computing in 2021

I drew a quick sketch of my impressions of the field on Twitter, and Steve Weis asked for a more detailed treatment. Here is a more accurate picture of that sketch: 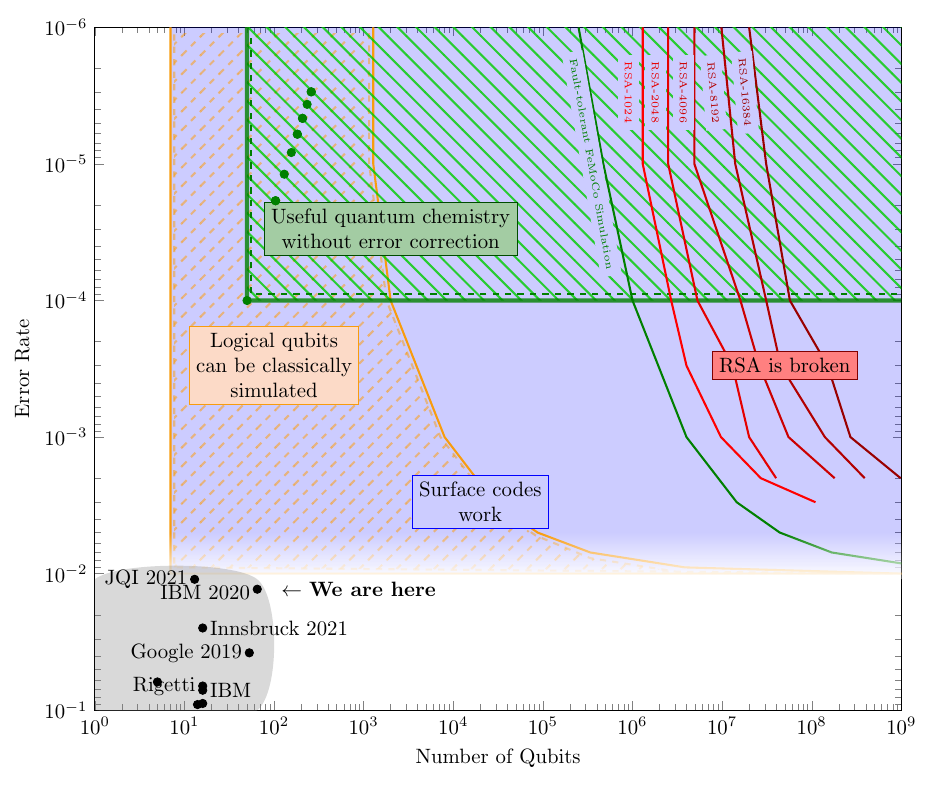 (Undoubtedly this chart is still incomplete. If you think some of the points on this chart should move, please send me a message and ideally a citation!)

Some terminology: A qubit is the basic unit of data in a quantum computer, and it can store a 1 or a 0 just like a classical bit, but also superpositions of those two states. A gate is an operation applied to a qubit, such as flipping a 0 to a 1, or changing the quantum phase, or XOR, etc.

To explain this chart: quantum data is very fragile. Most types of qubits today can only hold onto a quantum state for a few microseconds before they lose it – either they drift to another quantum state unpredictably, or they interact with the environment and "collapse" any superposition they had.

Not only that, any gate applied to the qubit has some chance of causing error. Today’s qubits are close to 1% gate error. Imagine if every time you sent a bit through a transistor, there was a 1% chance of flipping the bit. You could hardly perform any computation at all!

Google’s Sycamore chip, famous because it seems to be able to solve a (useless) computational problem faster than any classical computer, can only do about 20 gates in a row before being reduced to useless noise. To break RSA-2048 would require more than 2.1 billion gates in a row.

For quantum computers to be useful, we need more qubits but we also need better qubits.

A quantum computer that uses error correction to push qubit and gate errors to 0 is called fault-tolerant.

The front-runner for a quantum error-correcting code is called a surface code. The blue region in the chart is where physical qubits are good enough to form logical qubits in a surface code. After some feedback, I added a fade to the bottom of that region, since we're not exactly sure what the threshold is (very likely between 0.1% to 1%, but it depends on what kind of errors happen).

The yellow-///-striped region of the chart is where we can’t simulate all the physical qubits, but there are so few logical (error-corrected) qubits that we can classically simulate any error-corrected algorithm.

Once we have decent error rates (say, 10-3) then we just need to build lots of qubits and we can start doing useful things. However, the number of qubits for these fault-tolerant algorithms can be very high.

The green line shows the minimum requirements for a chemical simulation of FeMoCo, a molecule involved in producing ammonia from atmospheric nitrogen.

What about to the left of that green line? If you had 10,000 qubits but 1 in 1000 gates caused an error (i.e., 100x more qubits and 10x less error than today), could you still do something useful? We’re not sure. There are promising approaches, mainly variational quantum algorithms, which can be more robust against noise and can use error reduction techniques with lower overheads but less benefit than full fault-tolerance. The problem with these is that there are few provable guarantees on their effectiveness. They might work really well, or they might not, and maybe we won't even know until we can actually build a quantum machine and try them. There is a lot of research in this area, under the term “NISQ”: Noisy Intermediate Scale Quantum computers.

The green-\\\-striped region shows where we can solve some chemistry problems using quantum computers, without needing full error correction. The green dots are resource counts for some specific problems.

From this chart, here is my opinion on the prospects of quantum computing:

If you want a more thorough survey of quantum computing, I recommend John Preskill's excellent survey, where he coins the term "NISQ".

I posted this on Twitter and received good feedback, which I partially address here: